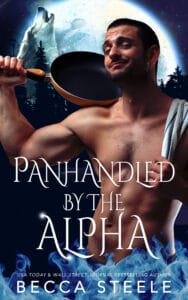 Panhandled by the Alpha is not real, at least, not in this universe (as far as I’m aware). BUT if the book did exist, and it somehow ended up in the world of The Four series, something like this might happen…

(Please be aware I wrote this scenario while ill in bed with the flu, and the medication might possibly have sent me a tiny bit crazy. Nevertheless, enjoy!)

“Alpha.” The trembling man next to me bowed low in greeting, and I had to bite the inside of my cheek to suppress a snort of laughter as I eyed the male in front of me.

So, this was him.

The almighty alpha. Leader of the wolf shifter pack.

He cut an imposing figure, even here in his kitchen, with his powerful body covered by an apron. Barely sparing the posturing man a glance, he raised a sardonic brow in my direction.

His voice was a low rumble, like distant thunder, soft yet full of power.

“I don’t know. Can you?” I raised an eyebrow in return, and the corner of his lip kicked up in amusement. We both ignored the gasp of shock from the bowing man.

“Tell me why you’ve entered my kitchen.”

“Why does anyone enter a kitchen? To get food, of course.”

Planting his hands on the counter in front of him, his nostrils flared as his eyes flashed with sudden fire. “You dare to enter the sacred kitchen of the alpha? Leader of the wolf shifters? Don’t you know how my name is revered around here, puny human?”

Ignoring my comment, he picked up the frying pan from the kitchen island and placed it on one of the hobs on the large stove. “Hand me the bacon, wench.”

The door swung open, smacking against the wall with a bang, and Cassius burst into the room, naked other than his Warning: Concealed Sausage apron. Why? Why couldn’t he just wear clothes like a normal person for once? Even the burn incident hadn’t scared him.

His gaze darted between us, his eyes narrowing. “What are you two doing? I’m supposed to be cooking the bacon, not you.”

“Uh…” I cleared my throat, stealing a glance at Weston, whose cheeks were flushed red. “Nothing.”

“Oh.” Cassius’ face cleared. “Oh. This is that werewolf chef roleplay thing, right? From that Panhandled by the Alpha book?”

There was a pointed cough from the floor, and Weston’s friend Rumi rose to his feet, looking everywhere but at us.

“Fuck off, Cass.” Weston glared at him. “Blame your girlfriend, she gave Lena the idea.”

He sighed heavily. “I can’t help what she reads. I tried to steer her in a different direction, but if a book doesn’t mention fantasy creatures with moist petals and pulsating members, she doesn’t wanna know.”

“Yeah, yeah, we’ve all heard you reading her books aloud. Frequently.” Folding his arms across his chest, Weston rolled his eyes at his best mate.

“Wait!” Cassius suddenly shouted, making us all jump as he stabbed a finger in Rumi’s direction. His face took on a green tinge, and he made an exaggerated retching sound in the back of his throat. “How did you get involved? Please don’t tell me this is some weird sex—”

“Let me stop you right there.” Darting across the kitchen, I clapped my hand over my brother’s mouth.

“I didn’t mean to get involved,” Rumi protested, throwing his hands up. “I only came here to borrow a hard drive from West so I could do some penetration testing!”

Cassius’ eyes widened, while my boyfriend lost it, laughing so hard that he had tears in his eyes.

It wasn’t even remotely funny. It was embarrassing as fuck, to be honest. Why had I let West talk me into this again? Oh, yeah, because he was convinced that I was some kind of Twilight superfan, thanks to my brother’s blatant lies about me being obsessed with Edward Cullen when I was younger. Edward Cullen wasn’t even a shifter, for fuck’s sake.

Anyway, after today’s disaster, I could say with 100 percent confidence that we would not be roleplaying as a bloody shifter and a puny human ever again.

At least, not when anyone else was around.

Sign up to my newsletter to stay up to date with all my book news!